When it comes to the administration of drugs, the oral route has long been the most convenient path of delivery, making it also the most popular.
Its ease of application renders it superior to alternative routes such as subcutaneous and IV injections when it comes to achieving high compliance rates, but other factors present several challenges for utilizing this route with all types of medications, such as biologics (proteins and peptides).

The difficult case of delivering biologics via the oral route

Because of their tendency to become quickly inactivated when delivered by mouth, biologic drugs are currently being administered via injection or infusion. This delivery route is used on a monthly, weekly, and daily basis by millions of patients worldwide, but is inherently accompanied by discomfort, pain, and potential harm associated with the exposure to protruding foreign objects.

The challenges of going the oral route

The digestive tract poses significant challenges to oral drug delivery of biologics:
· The small intestine is a hostile environment for peptides and proteins as it is full of digestive enzymes. Those enzymes damage or destroy the drug molecules before they can be absorbed.
· Due to the large size, even fully intact drug molecules that reach the intestinal lumen suffer from poor permeability across the intestinal wall and can struggle to reach the bloodstream.

To overcome the harsh digestive environment, we create a local, protected microenvironment that prevents degradation by proteolytic enzymes and facilitates the absorption of biologic molecules through proximate, direct contact with the intestinal wall.
Our solution is based on our proprietary shape-shifting technology, composed of compartments that contain super absorbent polymers that self-expand when reaching the small intestine. The expansion process deploys a tube-shaped patch carrying an API payload on a mucoadhesive matrix layer on its outer walls, pressing the layer into direct contact with the intestinal wall, followed by a controlled release of the API. In addition, the large contact area of the API containing patches with the intestinal wall enhances its protective properties.

The results of the experiment

In-vitro testing of drug release from the mucoadhesive layer

Paracetamol was one of the small molecules we experimented with in order to develop our biologics delivery system.
In this experiment we evaluated the release of a typical drug – Paracetamol (Acetaminophen) from two different mucoadhesive matrix polymer compositions. The release kinetics were assessed from the mucoadhesive layer towards the intestinal wall and from the (inner) backing layer towards the lumen.

Evident of favor releasing towards the intestinal wall

In the first experiment 50% of the loaded drug was released over the first ~ 1 hour of the experiment. There was an evident 140% release towards the front side (intestinal wall direction) relative to the back side.
In the second experiment the release rate was faster, with 50% of the loaded drug being released at ~ 30 minutes. Correspondingly with the first experiment, there was an evident 200% relative release towards the front side.

These early results demonstrate the flexibility of the design and characteristics of our product that will enable it to fit to multiple biologic drugs:

1. By making a moderate change in the polymer compositions between the two experiments, we achieved two different drug releasing kinetic parameters. This will enable us to precisely match the release rates to the needs of various drugs.
2. A significant higher drug release was achieved towards the front side that is facing the wall of the small intestine. This finding indicates that most of the drug dosage is released towards the requested side. With future overall and drug-specific modifications we will be able to increase this ratio even further.
3.In both experiments, the device maintained its mechanical integrity while releasing all the drug dosage. This fact is promising when considering that this long duration device stability is achieved with usage of different polymer compositions.

What’s happening now and what’s next

We’re continuing our research and development to develop the device to a fully functional form, which is taken orally, reaches its target region, releases the drug molecules, and disintegrates. Our work includes:
1. Modifications to the inward-facing layer of the device to become less permeable to the specific drug being used, while keeping its permeability to water.
2. Adding additional necessary components to the mucoadhesive matrix formulation for it to function optimally in the small intestine. For example: surfactants, absorption enhancers, and degrading enzymes inhibitors.
3. Testing the device disintegration mechanism in the small intestine environment.
Also, when considering the application of this technology to diverse types of drugs, there will be specific modifications required depending on the drug compositions and functionality.

We have a mission, and we’re very serious about it. By advancing our biologic delivery device platform, we will be able to address some of the world’s most prevalent chronic diseases at their root. 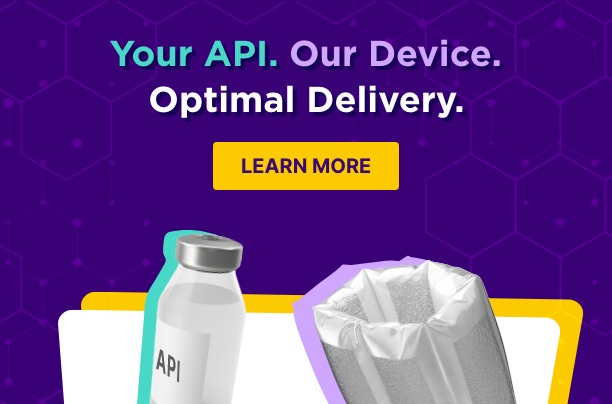